"Root for the Home Team" by A.E. Smith 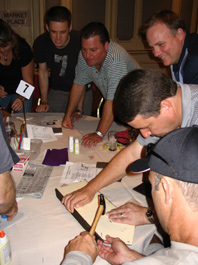 Coming home this holiday season will be a little sweeter for seven Louisiana families, thanks to one corporate group. The families, who lost their houses to Hurricane Katrina, are the beneficiaries of a new program offered by Impact 4 Good, a corporate teambuilding organizer based in East Hanover, N.J., that specializes in staging community service events.

After Katrina hit in August 2005, Impact 4 Good saw an upsurge in requests from companies wanting to contribute to Habitat for Humanity’s rebuilding efforts and created an activity that could benefit Habitat without the time and effort that construction projects require. “There are many companies that would love to do Habitat, but they might not have the time or the means to transport everybody out to a site,” says Alan Ranzer, Impact’s executive director.

The event can take place in almost any meeting space, for groups from 20 people to 300. Groups are broken into teams, given a list of home items to build-everything from a place to stash the mail to a hook for hanging keys-and a budget to buy materials. “The idea is that when families move into their new homes, they have something to put in them,” says Ranzer. At the end of the timed event, which usually takes two hours in total, the group with the most complete project wins. The price for a turnkey program averages around $60 per attendee.

The events benefit Habitat’s St. Tammany West chapter, which serves a region that lost over 5,000 homes, though the activity can be arranged to assist a group’s local chapter. Impact 4 Good partnered with Bonnie Boyd & Co., a New Orleans-area DMC, to organize an event at the Omni Hotel in November for 70 employees of Red Robin restaurants, part of an annual bonus celebration for its operations team. The group competed in teams of 10 people, and as an added motivation, each team’s table had a photograph of a family who would receive the materials.

The competition was intense. “Someone even snuck up to their room to get a hairdryer to dry the paint faster,” says Ranzer. The winning team earned bonus points for incorporating creative touches into their work, like putting thumbprints and writing the family’s name on items. Each team wrote a letter to their designated family, so there would be mail in the new sorters when the family moved in.

The event made a lasting impression. “I saw people around the hotel afterwards, and they were so fired up about it,” says Ranzer. “They could have built three houses in a day.”

Visit our Facebook, Twitter and LinkedIn pages for great images and ideas to inspire YOUR next event!

This website uses cookies to improve your experience while you navigate through the website. Out of these, the cookies that are categorized as necessary are stored on your browser as they are essential for the working of basic functionalities of the website. We also use third-party cookies that help us analyze and understand how you use this website. These cookies will be stored in your browser only with your consent. You also have the option to opt-out of these cookies. But opting out of some of these cookies may affect your browsing experience.
Necessary Always Enabled
Necessary cookies are absolutely essential for the website to function properly. This category only includes cookies that ensures basic functionalities and security features of the website. These cookies do not store any personal information.
Non-necessary
Any cookies that may not be particularly necessary for the website to function and is used specifically to collect user personal data via analytics, ads, other embedded contents are termed as non-necessary cookies. It is mandatory to procure user consent prior to running these cookies on your website.
SAVE & ACCEPT